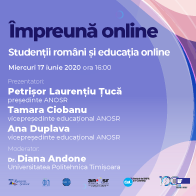 In these times of lockdown due to the COVID-19 pandemic, just like in other countries, face-to-face educational functions and activities are being moved online, using apps, platforms and various tools for distance education.

Many of us are struggling with the adjustment to working and teaching online, especially those who have always taught in a traditional classroom and are now being asked to rapidly regroup and prepare for a longer period of  educational “social distancing” .

During this webinar from the Online Together series, the representatives of the students within the National Alliance of Student Organizations in Romania were present, who spoke about the impact of online education among students, at the national level.

➡️Colleagues from ANOSR invited us to reflect on the following questions:

What will happen in the autumn with the accommodation units of the universities?

Can hybrid education be integrated into Romanian higher education?

How will graduates have access to quality jobs after the pandemic?

Approximately 100 people from different academic backgrounds participated in the webinar, who expressed their interest in the information presented by the representatives of ANOSR students on the studies conducted at the national level on the impact of online education.

Numerous questions and problems were raised from the participants, to which the representatives actively responded, exposing their involvement in future studies related to this topic, of great scope nowadays - online.

Online Together webinars are organized in collaboration with IEEE Romania, the EDEN Association and the Politehnica University of Timișoara.

Watch the live stream on YouTube, by clicking on the video below:

Young engineer, a graduate of the study program Mechatronics and Robotics, from the Faculty of Mechanics of the Politehnica University of Timișoara, Petrișor Țucă followed a master's degree in Robotic Systems with Artificial Intelligence, within the same faculty, and now follows the master's degree in Organizational Management. Petrişor started his representation activity in the League of Students from the Faculty of Mechanics from Timișoara (LSFMT), where he gradually evolved. For two terms he was the coordinator of two of the league's departments, and in the third term, he became president. In the last years, he has been part of various decision-making structures within the Politehnica University of Timișoara, such as the Council of the Faculty of Mechanics, the University Senate, and the Senate Bureau, but also part of numerous commissions and working groups in the university environment. He is an expert evaluator of the Romanian Quality Assurance Agency, participating in several missions to evaluate study programs and institutional evaluations, and since October 2018 he represents students in the ARACIS Council. In the term 2017-2018, he held the position of vice president of internal relations ANOSR, and in August 2018 he became president of the federation, being re-elected for the second term in the last edition of the Forum of Student Organizations in Romania, which took place in August 2019.

A 3rd-year student at the Faculty of Law at Babeș-Bolyai University and evaluator of the Romanian Agency for Quality Assurance in Higher Education, Tamara chose to get involved in the student movement at the national level because she is a person dedicated to her ideals and truly believes in the power of change that leaves each of us. She believes that the development of education and youth policies is a priority for quality education and that the entire academic community should be actively involved in their perpetual improvement.

A student of Psychology at the "Lucian Blaga" University of Sibiu, Ana chose to get involved in the student movement since the first year with colleagues from the Association of Students in Psychology Sibiu, where she worked as a financial coordinator. She became passionate about education and found herself in the principles of ANOSR from the first contact with the federation. Ana chose to represent students at the national level because she strongly believes that change is possible and achievable if we unite in the interests and efforts to perpetuate changes in the current education system. She considers that the improvement of the education system is a decisive point in the change of the society, respectively ANOSR represents not only an important element for the representation of the interests and rights of the students but also for the development of the country.

Dr. Diana Andone (@ diando70) is the director of the eLearning Center of Politehnica University of Timișoara, with responsibilities in the planning and implementation of distance learning and the integration of the use of online educational technologies for all forms of education, through the UPT Virtual Campus - CVUPT . Dr. Andone is a lecturer in multimedia and web technologies, with an intense research activity at international level through various projects with European funding and multiple publications (with over 17 books, 80 scientific papers, 11 Best paper Awards). Passionate about the use of technologies in everyday life, Diana promotes the use of open resources OER and MOOCs, developing UniCampus - online courses in Romania. Dr. Andone is strongly involved in the activity of the scientific community through various management functions of international associations EDEN (Vice-president), IEEE Romania, IEEE CS TCLT, but also by supporting the activity of the regional community of start-up and innovation, cultural and social responsibility. 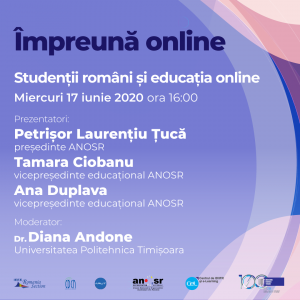 Webinar #onlinetogether - The perspective of Timisoara students on online education

The program of the annual EDEN 2020 Conference - organized by UPT, for the first time ONLINE